Solar companies and farmers can work together to harvest sunlight for both energy and food. 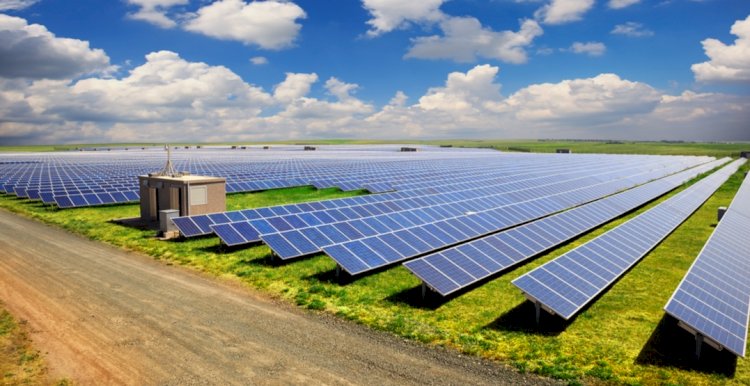 How Solar Panels Could Help Save Struggling Farms

Solar companies and farmers can work together to harvest sunlight for both energy and food.

As winter approached in 2018, a curious plot of vegetables planted beneath neat rows of sloping solar panels on stilts at Manzo Elementary School in Tucson was still going strong. Greg Barron-Gafford, an associate professor at the University of Arizona’s School of Geography, Development and Environment, and his research team had watched the plants flourish under the panels’ shade throughout the summer, one of the hottest on record, and he was eager to see how long they would last.

“We had basil and tomatoes go throughout the entire winter,” Barron-Gafford told HuffPost. “At that point, instead of being annual, they turned into perennial crops.” One of the basil plants grew over 8 feet tall. The student gardening group sold 9 gallons of pesto at a farmers market.

The productivity of the garden — part of the university’s Community School and Garden program ― provided encouraging results for Barron-Gafford’s research on “agrivoltaics”: growing food and generating solar energy on the same land.

As renewable energy ramps up, the concept could at once help fulfill the need for land on which to build new solar installations while also helping farmers stay afloat in the face of converging stressors.

It’s a case where one plus one could equal more than two.Greg Barron-Gafford, associate professor at the University of Arizona

U.S. farmland is on the decline: 11 million acres of farmland across the country were converted to residential use or taken over by cities and suburbs from 2001 to 2016, according to the American Farmland Trust, which works to preserve farms and ranchland. Farmers across the U.S. are struggling to make ends meet, and many can’t keep their businesses going. Climate change promises to make farming even harder by bringing on hotter and drier conditions, raising the need for irrigation while disrupting water supplies.

“These days [hay farming] doesn’t really pay for our property taxes plus water and utilities,” said Byron Kominek, whose family has been farming in Boulder, Colorado, for almost 50 years. Kominek hopes to revitalize the family business by reimagining it as an agrivoltaic farm that will harvest sunlight for both energy and food.

Traditional solar farms conjure up an image of neat rows of deep blue panels angled toward the sky, hugging close to brown, bare ground. But increasingly, solar developers are exploring ways to “green” solar farms — planting grass, food crops or native vegetation to support pollinators under and around photovoltaic arrays. And scientists are finding that agrivoltaics could yield outsized benefits for farmers and energy companies. Agrivoltaic farms could not only help food and energy production to expand in harmony in land-scarce regions, but they could also help increasingly water-stressed agricultural regions save water.

“It’s a case where one plus one could equal more than two,” Barron-Gafford said.

Renewable energy needs to rapidly replace greenhouse gas-emitting fossil fuels to keep up with energy demands while avoiding the most dire effects of climate change. Solar power, one of the fastest-growing sources of electricity in the world, is projected to lead renewable energy growth in the next decade. But it needs land. By 2030, researchers anticipate, nearly 2 million acres of land will be required for planned utility-scale solar projects in the U.S.

Farmlands are prime candidates for hosting solar arrays. The same conditions that make for good farming — lots of sun, light winds and moderate temperatures — lead to the highest solar energy yields. Solar developers also eye agricultural land because it is flat and comes with infrastructure such as roads and electrical connections, said Jordan Macknick, an analyst at the Department of Energy’s National Renewable Energy Laboratory.

But some farmers, seeing that panels have become more profitable than plants, have been criticized for turning over their cropland for the installation of solar. Macknick said he’s seen “a lot of pushback from rural and agricultural communities over the perception that solar projects are taking prime agricultural land out of production.” In parts of New York and Maryland, for instance, neighbors have fought solar development on farmland.

Rather than displace crops, solar systems could instead help keep farms alive — if both share the same land, said Drew Pierson, head of sustainability at Massachusetts-based solar developer BlueWave Solar. His company is working to help existing farms in New England earn revenue from solar power while maintaining their crops as much as possible.

“Agrivoltaics can be a way to strengthen the local food system by keeping farmers on the property,” Pierson said.

BlueWave Solar is reaching out to farmers for permission to erect panels on their existing cropland instead of clearing land to build new solar arrays. The panels would be raised high off the ground and spaced apart to the planting of crops could continue. The farms may lose some land area for growing, Pierson explained, but they would receive regular rent from the solar array owners, providing a stable source of revenue. The energy generated would be sold to the local community.

The company will start building its first agrivoltaic project at Knowlton Farm in Grafton, Massachusetts, this month.

In Boulder, Kominek, seeking ways to make his 24-acre farm more profitable, initially considered turning one of his three fields over to solar. Then he met Macknick and Barron-Gafford, who introduced him to agrivoltaics. “That made a lot of sense to me, and I thought: You know what? Let’s give it a go,” he said.

The farm — rechristened Jack’s Solar Garden, for Kominek’s grandfather who bought the family plot in 1972 — recently completed construction of two sets of solar panels erected 6 and 8 feet off the ground that will track the sun from east to west and generate 1.2 megawatts of power. Kominek will surround the array with native shrubs to host pollinators and plant vegetables underneath the panels in the spring. Macknick and Barron-Gafford will study the vegetation’s growth and the microclimates created below the panels.

There’s not nearly enough data on agrivoltaic farms yet. But early evidence suggests that solar and agriculture could not only coexist, they might even mutually benefit. Certain crops may benefit from the panels’ protection, and solar panels benefit from having vegetation underneath them.

Shade from solar panels can alleviate heat and reduce water losses by slowing evaporation from the soil. “Plants are like humans: If we are under the sun, we have to drink more water,” said Pierre Genin, director of international affairs at French solar development company Sun’R.

As far back as 10 years ago, intense sunlight and heat began degrading the taste and alcohol content of wine produced at vineyards in southern France, Genin said. Sun’R built a 2.2-megawatt solar array over 4.5 hectares of wine grapes at the vineyard Domaine de Nidoleres in 2018. The panels can be maneuvered to provide full sun in the morning and shade in the afternoon. The vines under the array used 20% less water, and the wine made from them has an improved acidity.

Findings like this could have important implications for growing food in a rapidly warming world. Climate change projections of drier and hotter conditions have prompted global interest in figuring out ways to grow crops under heat and water stress.

“In dryland environments and deserts around the world, plants have really great adaptations to live in such a high light and hot environment,” Barron-Gafford explained. “But most of our food crops don’t have those adaptations. They’re just cultivated plants that survive because we water them so much.”

In the arid climes at the University of Arizona, Barron-Gafford’s team documented how well tomatoes, jalapeños and chiltepin peppers — a high-value native crop that evolved to grow in the shade — performed when they were grown beneath solar panels. The benefits were clear: Tomatoes and chiltepin peppers produced double the fruit when they were shaded by solar panels compared with those that weren’t.

Barron-Gafford saw similarly encouraging results at Manzo Elementary. Despite being left untended for four months during the pandemic, the chiltepin peppers continued growing and had even germinated baby plants. “If a plant germinated, that tells you the environment was really good enough for it to do that.”

In addition to shading vegetation from the harshest sun during the day, panels can also provide cover against frost at night, similar to how a carport or a tree prevents frost from forming on cars overnight. Being protected from both the hot sun and killing frosts, the crops underneath the university’s solar panels produced fruit throughout the summer and winter. Their longer growing season could explain their higher yields, Barron-Gafford said. On average, they also used about 30% less water.

The plants improved the solar panels’ productivity, too: Panels with crops growing underneath them stayed cooler by about 16 degrees Fahrenheit and produced 2% more electricity than those without.

The Southwest’s sunniness is a double-edged sword for photovoltaics. The region’s hot temperatures lower the amount of energy solar panels can produce, explained Macknick, who was also involved in the Arizona research study. For every 1 degree Celsius (1.8 Fahrenheit) increase in temperature, solar panels lose nearly half a percent in efficiency. Having vegetation underneath solar panels keeps them cool because plants release water vapor through tiny pores on the underside of their leaves, a process called transpiration that cools down the plants’ leaves and the nearby air.

Not all crops are suitable for growing underneath solar panels. Broccoli, for instance, needs cold temperatures at night to signal the plant to grow florets. And large harvesting machinery can’t navigate around installations, making agrivoltaics inherently incompatible with crops like corn or hay. A lot more data is needed on how to make dual-use farming work in different climates and for various crops.

Conservationist Heidi Ricci of Massachusetts Audubon will be keeping an eye on the results. Her state, which has lost thousands of wild and farmed acres to solar development, offers aggressive financial incentives for agrivoltaic development. She worries that without adequate data, solar panels could wind up hurting the agricultural productivity of prime farmland.

“This is all still very experimental in this region, so we don’t have a lot of real information yet,” she said. “We’re concerned about it gearing up on too much acreage before we really know a lot more about what’s going to work and what’s not.”

The Energy Department lab is coordinating and conducting research at 19 sites across the U.S. to figure out what vegetation — food crops, pasture grass for grazing or native vegetation to support pollinators — pairs best with solar in various situations. That information will be key to persuading more solar developers and farmers to try out agrivoltaics, said Macknick. “I think for some, it sounds like something that could really have multiple benefits, but they also don’t want to be the first one to do it.”

One thing has become clear: Fertile ground beneath any solar array should not be left bare. “If you have those solar arrays and nothing growing, you’re losing a real opportunity there to draw down carbon to help balance the equation for greenhouse gases, in addition to losing the opportunity to grow crops or plants for pollinators,” suggested Florence Reed at Sustainable Harvest International, who isn’t involved in the agrivoltaic projects.

Barron-Gafford is hopeful about the potential benefits of agrivoltaics for farmers, clean energy companies and the climate.

“We learn so many times about the negative consequences of things we didn’t imagine, especially once we start to manipulate ecosystems or biology,” he said. “But this was a very pleasant surprise to find these positive interactions.”