A solar photovoltaic (PV) system was successfully installed on the rooftop of WM Keck Observatory’s telescope facility on Maunakea. 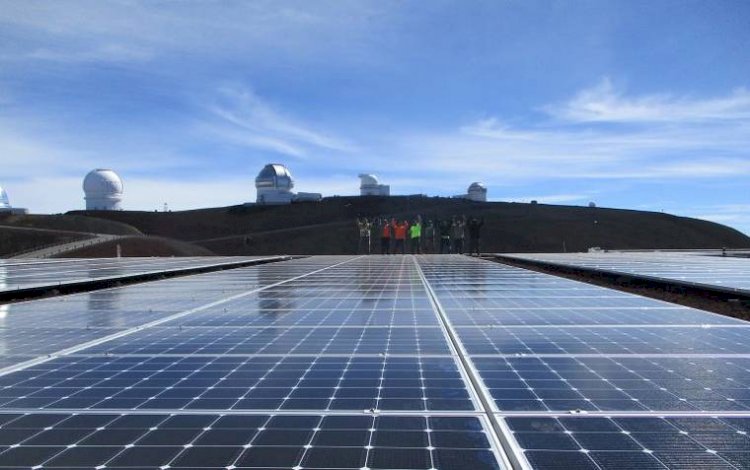 The PV was put in between the domes of the twin Keck I and Keck II and will reduce 10-15% of the Observatory’s need for electrical power and 183 metric tons of carbon emissions.

“Incorporating renewable energy generators such as solar PV is important to Keck’s core values of stewardship and service,” said project lead Mark Devenot, infrastructure specialist at Keck Observatory. “It will reduce our reliance on electricity derived mainly from fossil fuels, which underscores our efforts to be good stewards of the planet.”

With this new solar system in place, Keck Observatory now has PV installed at both its telescope facility on Maunakea as well as its headquarters in Waimea town (on Hawaii Island), the latter of which was installed in 2013.

The solar site is the world’s largest commercial solar system installed at the highest altitude. Hawaiian Electric approved operation of the PV system on Sept. 30. It consists of a 133-kW photovoltaic array and 332 solar panels that are strategically placed on the unique 20,940 square-foot ballasted roof to avoid snow and ice fall from the domes.

“One of the biggest challenges was attaching the PV array to this type of roof, which has no structural framework to anchor the system,” Devenot said.

To address this issue, M3 Engineering and Technology of Arizona designed an innovative, one-of-a-kind solution and developed a custom PV roof racking system.

Two Hawaii-based contractors performed the installation work. Sakoda Construction of Hilo assembled the structure that supports the solar panels; REC Solar’s team from Honoluolu on the island of Oʻahu installed the electrical controls and solar panels.

At the high altitude, the panels will catch more photons and produce more energy than at sea-level locations. This is because sunlight atop Maunakea doesn’t have to travel through as much of the Earth’s atmosphere where the photons could be absorbed by something else. Having 40% less atmosphere, which is one of the reasons that makes Maunakea one of the best places on Earth to conduct astronomy, also makes for efficient solar energy generation.

“I am proud and excited that our observatory took the initiative to install PV and do our part for the environment while simultaneously saving costs,” said Marc Kassis, instrument program manager at Keck Observatory. “We made great strides in PV by installing panels in previous years at our headquarters, and now we are taking advantage of solar power at our telescope facility on Maunakea. This is fantastic and is a total win all around.”