Across the West, states are requiring utilities to move away from fossil fuels and increase their portfolios of renewables. 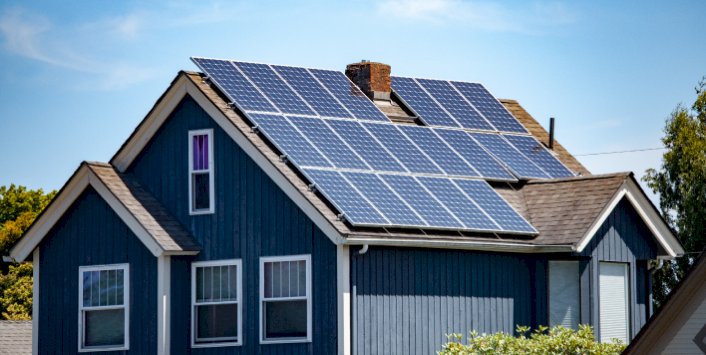 The Biden administration is expected to encourage and incentivize the construction of large-scale renewable projects. Congress is already setting the stage for this.

In its spending bill in December, Congress directed the Department of Interior to work toward permitting at least 25 gigawatts of renewable projects on public land by 2025 (yes, this decade).

The two trends place Nevada in the front-and-center. About 85 percent of the state’s land is managed by the federal government in one form or another. And the driest state in the nation also happens to be one of the sunniest, making it a prime location for large-scale solar projects.

Solar developers are responding. There are about 20 pending applications for solar projects in Nevada, according to the U.S. Bureau of Land Management (BLM), the agency that oversees most of the public land in the state. The agency is seeing increasing interest in solar — and not only near Las Vegas, where projects dot the highways. They are seeing interest across Nevada.

Environmental groups (in addition to many Nevadans) want to see action on climate change. Yet they worry that poorly planned solar projects could undermine other pressing issues. The loss of wild places to development. The global push to protect 30 percent of land by 2030. The ongoing threats to imperiled species, including the Mojave desert tortoise and the Greater sage grouse.

These groups, which range from The Nature Conservancy to the Wilderness Society, are calling on federal and state officials to put projects on less sensitive land or on brownfields (old mines, landfills, etc.) in Nevada. To do so will require coordination at all levels of government.

Jaina Moan, who works on renewable siting for The Nature Conservancy in Nevada, said that the state has a role to play in this, even though most land is managed by federal agencies.

The state, Moan said, “can work with the Public Utilities Commission, [and] they can work more closely with the federal land agencies to ensure that the siting is appropriate for these projects."

Other states, such as Massachusetts, have passed laws to encourage renewable development on brownfields and have worked to assuage concerns developers might have about funding their projects (it’s cheaper to build on untouched land) or assuming liability for past industrial activity.

If it all sounds easy, identifying land for solar development is incredibly hard, and past planning efforts have generated mixed results. BLM land managers already have a system that attempts to direct solar development into low-impact areas, known as Solar Energy Zones.

There are five Solar Energy Zones in Nevada, but projects have only ever been built in one of the zones. Instead, developers have opted to build in other areas. That’s often because of cost and access to transmission. Developers cite transmission as a big factor in where to locate a project.

What’s more, many projects rely on leases that were issued before the Solar Energy Zones were created in 2014, noted Dustin Mulvaney, an associate professor at UC Santa Cruz who studies how renewable energy siting intersects with other interests, particularly on public land.

“In some ways, the whole thing is irrelevant,” he said. “A great majority of the solar farms that are on public land were all exempt from the Western Solar Plan,” which created the zones.

Yet Mulvaney said there are still opportunities to balance conservation and development.

“There's a lot of people pushing people into false choices, pitting conservation and renewable energy,” he said, noting that other parts of the country have found ways to marry both concerns.

With a new round of interest in solar development, the question of planning is coming to the forefront again. Where should the solar go and how do you incentivize development in low-impact areas? Alex Daue, assistant director for energy and climate at The Wilderness Society, said the Solar Energy Zones still provide a good planning framework to move forward.

He pointed to the Dry Lake Solar Zone, the one low-impact area in Nevada that has attracted development. By building there, he noted, developers have been able to speed up permitting. The focus now, he said, should be on identifying more areas that are closer to transmission.

“The federal government should be increasing the incentives for development in these areas,” he said, adding that agency officials should prioritize solar permitting in these designated areas.

“We know what the alternative is,” he said. “We have seen projects proposed and built in areas that are not low-impact. And without upfront planning, we'll probably see the same.”

Yet for other environmentalists, including Basin and Ranch Watch’s Kevin Emmerich, solar should only be placed on public land as a “last resort.” Instead, Emmerich is advocating for the Biden administration to emphasize developing solar projects on brownfields and rooftops.

“I would hope that they have learned from some of the impacts in the past and would like to work with us in siting these a little more properly,” Emmerich said in an interview this week.

A lot of what happens next will happen at the administrative level — at the discretion of federal land managers. In Southern Nevada, BLM land managers have created a formalized process for looking at solar projects when they are proposed outside of the Solar Energy Zones.

The Southern Nevada District Office, in August, looked at 16 large-scale solar projects and ranked them. Kristen Cannon, a spokesperson for the office, said “applications that have high resource conflicts such as anticipated high density of sensitive cultural or historic resources, desert tortoise connectivity corridors, overlap with designated utility corridors and Special Recreation Management Areas are ranked lower than those that don’t have these conflicts.”

Three projects were ranked as high priority, two were ranked as medium priority and 10 were considered pending, a designation that means more information is needed to move forward.

On some projects, this process has already had an immediate effect. For instance, it means that the agency is prioritizing other projects over some that are closely-watched and have attracted local opposition. The Battle Born Solar Project is one such project, expected to span about 9,000 acres of the Mormon Mesa in the Moapa Valley. Last year, Gov. Steve Sisolak wrote a letter to the Trump administration seeking to fast-track permitting for the project. But as KNPR reported in December, local residents rallied against the project, which could affect recreation.

For now, the BLM is prioritizing other solar projects. In a Dec. 9 email the agency sent to Lisa Childs, an organizer opposing the project, the agency put it like this “We have identified several other applications for solar energy development projects that have anticipated lower potential for resource conflicts that we have prioritized for review, so it is unknown when the Bureau of Land Management would be able to begin any work on the Battle Born project application.”

Here’s what else I’m watching this week:

For decades, the Dann sisters refused to pay grazing fees to federal land managers, a dispute that eventually made its way to the Supreme Court. Dann also fought back against the federal government’s permitting of gold mines and in Western Shoshone territory and raised concerns about the legacy of atomic testing. The Dann sisters’ activism, at times, put them at odds with other members from the Western Shoshone tribes, many of whom sought to settle outstanding claims with the federal government. The Associated Press published a piece about Dann’s passing.

At Anaconda, mining is on the table: The Bureau of Land Management held its first meeting Tuesday night about whether to privatize public land at the former Anaconda Copper Mine, an effort that would leave the federal government with little oversight over a complex mine cleanup (the mine polluted local groundwater with uranium and sulfate). For more context, I wrote about the proposal last year. The meeting was largely uneventful, but one thing did stand out to me.

The agency is in the process of conducting an environmental assessment of the proposed land transfer. Watchdog groups want the review to consider how privatizing public land could affect future mining. But when questions about future mining at the site came up during the meeting, a consultant for the agency appeared to suggest that there weren’t proposals for re-mining at the Anaconda Copper Mine. This contradicts much of the reporting I’ve done. Here is what I know:

In an interview in 2019, state regulators discussed re-mining and said that it could, in fact, be a big part of the method for remediating the mine. As I reported in 2019, a company has actively explored the site for mining. A recent document, filed with state regulators as part of the cleanup process, stated that “future development of the site is likely to support mining and may include construction of additional office space/or mineral processing facilities” (emphasis mine). That document was filed by the Atlantic Richfield Company, which wants to acquire the public land.

The big takeaway is that the future is going to require everyone to give a little. The difficult part is how to do that in an equitable manner. The quote that struck me came from the head of the Colorado River District: “All of us, regardless of our legal rights, regardless of what's on paper, we need to consider how we can use less water. And we need to take action immediately.”

“We all have a share in this.” In an interview with Los Angeles Times reporter Sammy Roth, the General Manager of the Metropolitan Water District of Southern California, Jeff Kightlinger, echoed this sentiment about collaboration on the Colorado River, regardless of legal right. The Q&A is very interesting and worth reading. Kightlinger also discussed a recent investment by the Southern Nevada Water Authority in a Southern California wastewater recycling project.

Expect to hear more about the Salton Sea: Everything in the Colorado River is connected. And even conservation and cutbacks in some places can lead to environmental consequences. That’s what’s happening at the Salton Sea, a public health crisis continuing to create dust and air quality problems in California’s Imperial Valley, as The Desert Sun’s Mark Olalde explains in a collaboration with High Country News. A must-read about the struggle to fund a cleanup.

‘A brave new world when it comes to snow and wildfire:’ KUNC’s Luke Runyon reports on what we know — and what we don’t know — about how wildfires affect drinking water supplies.

“The demolition of the largest coal burner in the West is a milestone for environmentalists who fought, and continue to fight, to shift the country to renewable energy,” Randazzo wrote. “But it was a somber moment for the hundreds of people who worked at the plant, some following multiple generations of family members before them, who benefited from the good-paying jobs.”

Two degrees of warming: A new study this week found that “the amount of baked-in global warming, from carbon pollution already in the air, is enough to blow past international agreed upon goals to limit climate change,” Seth Borenstein reported for the Associated Press. Still, that amount of global warming — about 2.3 degree Celsius since pre-industrial times — could be delayed for centuries with rapid reductions in greenhouse gas emissions, the study found.

Mountain towns in the time of COVID-19: Deeply reported piece by High Country News’ Nick Bowlin on the growing struggles and tensions facing small mountain towns during COVID-19, as wealthy part-time residents move away from cities and flock to second homes, putting a strain on resources. This story looks at an attempt by a group of second-homeowners, frustrated by COVID-19 rules in one Colorado county, to create a Super PAC and influence local politics.